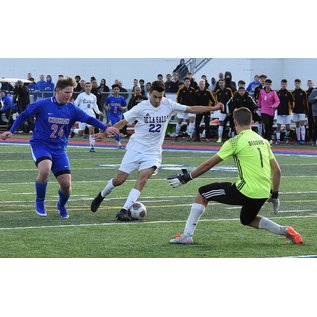 For the last 25 years, Hall of Fame Coach Thaier Mukhtar and his award-winning staff have led the most popular youth soccer camp in Metro Detroit. Designed and directed by Coach Mukhtar, these camps have welcomed thousands of players across the tri-county region each July. The camp is designed to push players to reach their potential, allow them to train with their friends and teammates, and prepare them for their upcoming seasons. Players will spend the week learning the game the right way, working hard, and most importantly, having fun! Join thousands of camp alumni that have improved their understanding of the game and taken their skills to the next level.

Coach Mukhtar brings 38 years of Boys and Girls Head Coaching experience at both De La Salle Collegiate (1982-2012, 2018-Present) and Fraser High School (2004-2017). He’s coached over 1000 games – compiling an incredible overall record of 804 wins, 210 losses, and 152 ties. Coach Mukhtar, the second-winningest coach in MHSAA history, has led De La Salle to 5 Division 1 State Championships (1990, 1992, 1993, 2000, 2005), 28 District Titles, and 18 Catholic League Titles. In 2019, he led DLS to its 28th regional title in 31 years. Coach Mukhtar has placed an incredible 136 players on All-State and sent 66 former players to NCAA Division 1 Programs. In addition to 10 State Coach of the Year Awards and 2 Midwest Coach of the Year Awards, he has also been named National Coach of the Year. Coach Mukhtar is a member of the MHSSCA Hall of Fame, Catholic League Hall of Fame, Macomb County Hall of Fame, and De La Salle Hall of Fame.

Please bring a water bottle (though water and Gatorade jugs will be available to refill your bottle), a ball, cleats and sunscreen and indicate your position, especially if you are a goalkeeper and want special goalkeeper training (as we will have multiple goalkeeper trainers on staff)

REMINDER: All campers must turn in a signed RELEASE AND LIABILITY FORM before the start of camp.

2021 Summer Camp Refund Policy: Full registration refunds will be issued for any student who withdraws from camp 48 hours prior to the start of camp. No partial refunds will be issued for missed day(s). Refund requests must be submitted in writing to the Director of Enrollment Management. They can be emailed to [email protected] or mailed to De La Salle Collegiate, Attn: Summer Camps Refunds, 14600 Common Road, Warren, MI 48088. If possible, please include your Pilot Hangar order confirmation number when submitting your refund request.

Add your review
0 stars based on 0 reviews